How To Web is where we met our Lead Investor

This is the story of how we met our lead investor. Written by Florin Muresan, our CEO:

I was just starting out with really being an entrepreneur in May 2011. Until then I just thought of myself as a Branding Guy. Branding is something that I still like a lot. I started attending different events where I could learn more about startups. I was searching to find that “startup vibe”. And I’m glad I found a place that had it. It happened in June 2011, Cluj-Napoca..

How To Web Cluj was highly recommended to me and some entrepreneurs that I knew personally, attended, so I said: let’s give it a shot. That’s where I met one amazing entrepreneur. His name is Philipp Kandal. He’s Co-Founder and CTO of Skobbler, one of the leading tech startups in Germany and last month he became an angel investor in my current startup, Squirrly.

He had an amazing speech about raising Venture Capital and the dangers associated with the carelessness of startup founders during the due dilligence phase, some crazy clauses that people place in contracts, etc. I was impressed. Thoroughly impressed. Not to diss the other speakers at startup events, but this guy actually had content. Good content. Content you’d want to listen to and take home with you.

We had some conversations on Twitter after the conference. Just keeping in touch, following up, etc.

Calin Vingan, who was my co-founder at Cif2.net (my first startup) and is also my co-founder right now at Squirrly, and I have been searching for events where we could start placing Cif2.net on the map. Venture Connect Cluj 2011 followed, where I had a horrible pitch, and just a few geeks (great geeks by the way) understood what we were doing. I thought to myself, “ok, next startup event then”. I ended up at How To Web 2011 and I met Philipp again there. I also met Bogdan Iordache (who co-ordinates the awesome team of HTW) and Horatiu Mocian, Founder and CEO of SociaLook. These are 3 people that helped me a lot in organizing my thoughts and they gave me a lot of valuable feedback, during and after the event. Strong connections have been built there. I had 3 awesome people around me who always gave me constructive feedback on the decks I prepared, on the way I thought about business, events, pitching, etc.

Strong relationships are built during How To Web. I mean it. Philipp and I continued exchanging ideas for a few more months, and when I finally pivoted Cif2.net and changed it to Squirrly (really big change: went for a bigger, paying market) he wanted to find out what this Squirrly was all about. I remember presenting Squirrly to him, and at one point he said, “Ok, stop selling. I already bought it”. And when he thought a bit more about the opportunity, he said he’d invest.

On the 26th of September 2012 we signed the investment agreement with him and a friend of his, Ibrahim Evsan, who is a serial entrepreneur and angel investor from Germany. Sometimes just meeting people and following up, keeping the conversation alive will bring much better results then just going to a random guy and pitching a project. How To Web builds strong relationships which if properly nurtured lead to amazing things. The startup vibe there is amazing.

So pack your bags for November, attend How To Web 2012, let’s get a beer and know that: It’s time to get Squirrly! (pun intended) 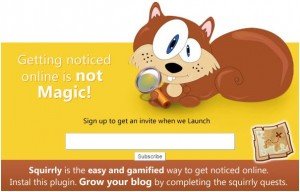